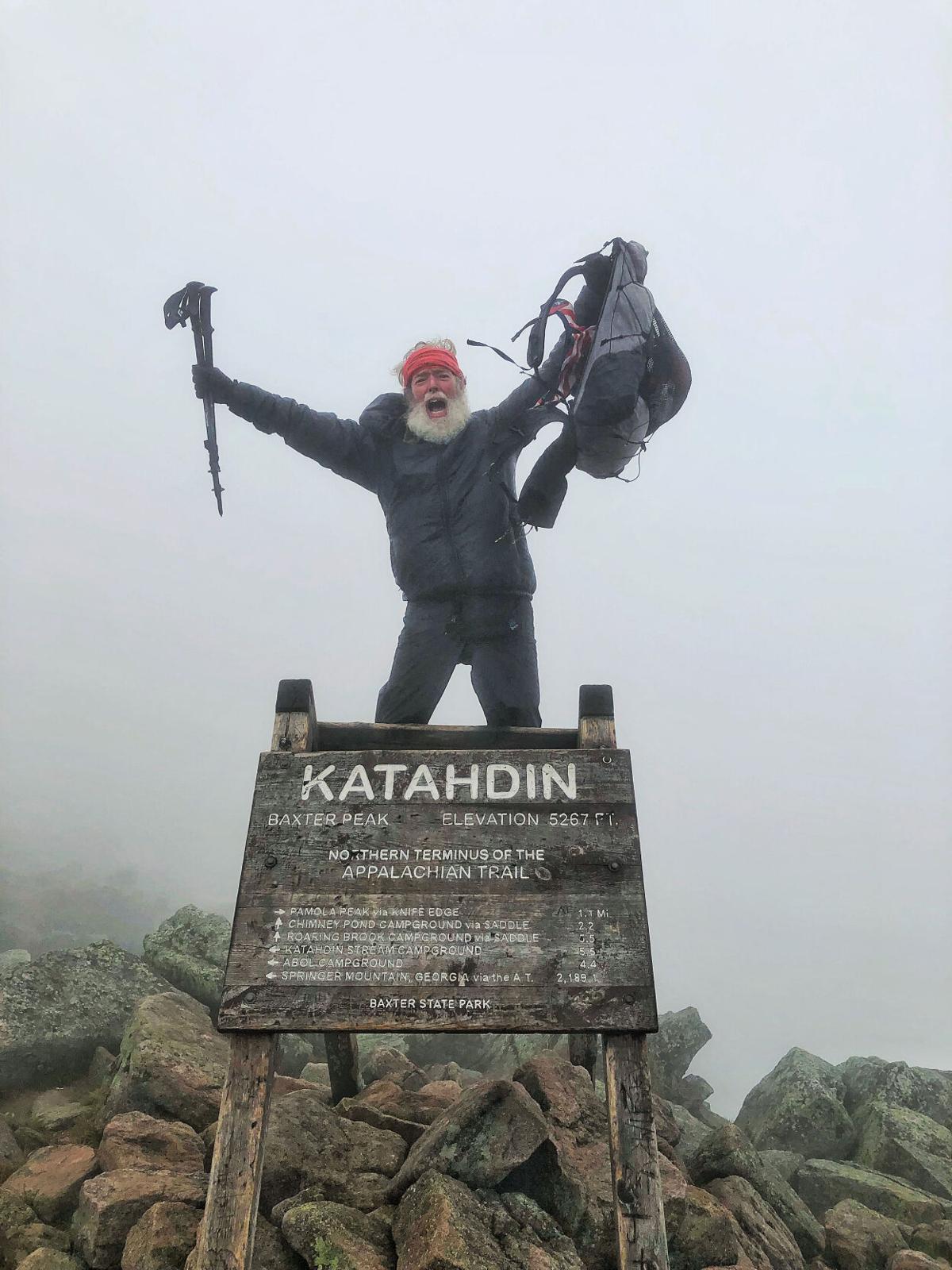 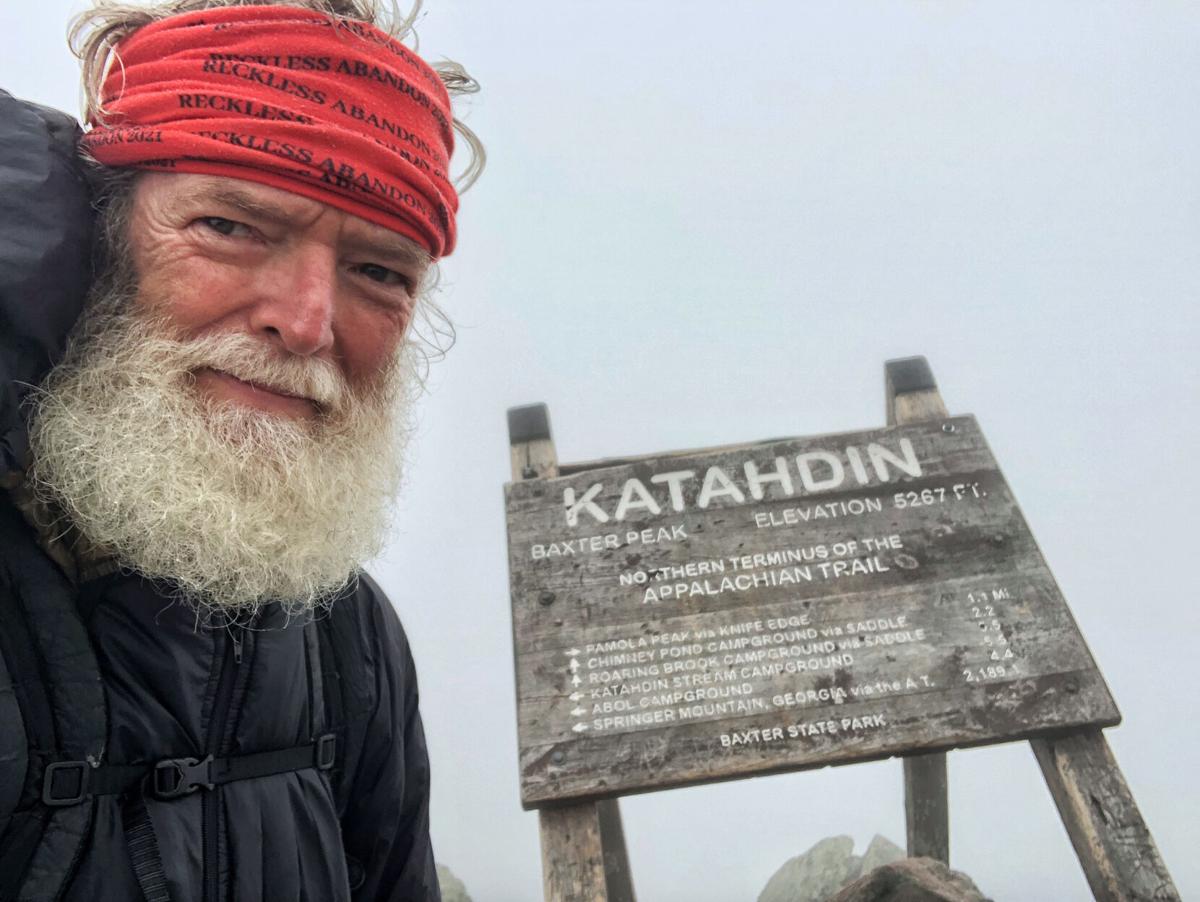 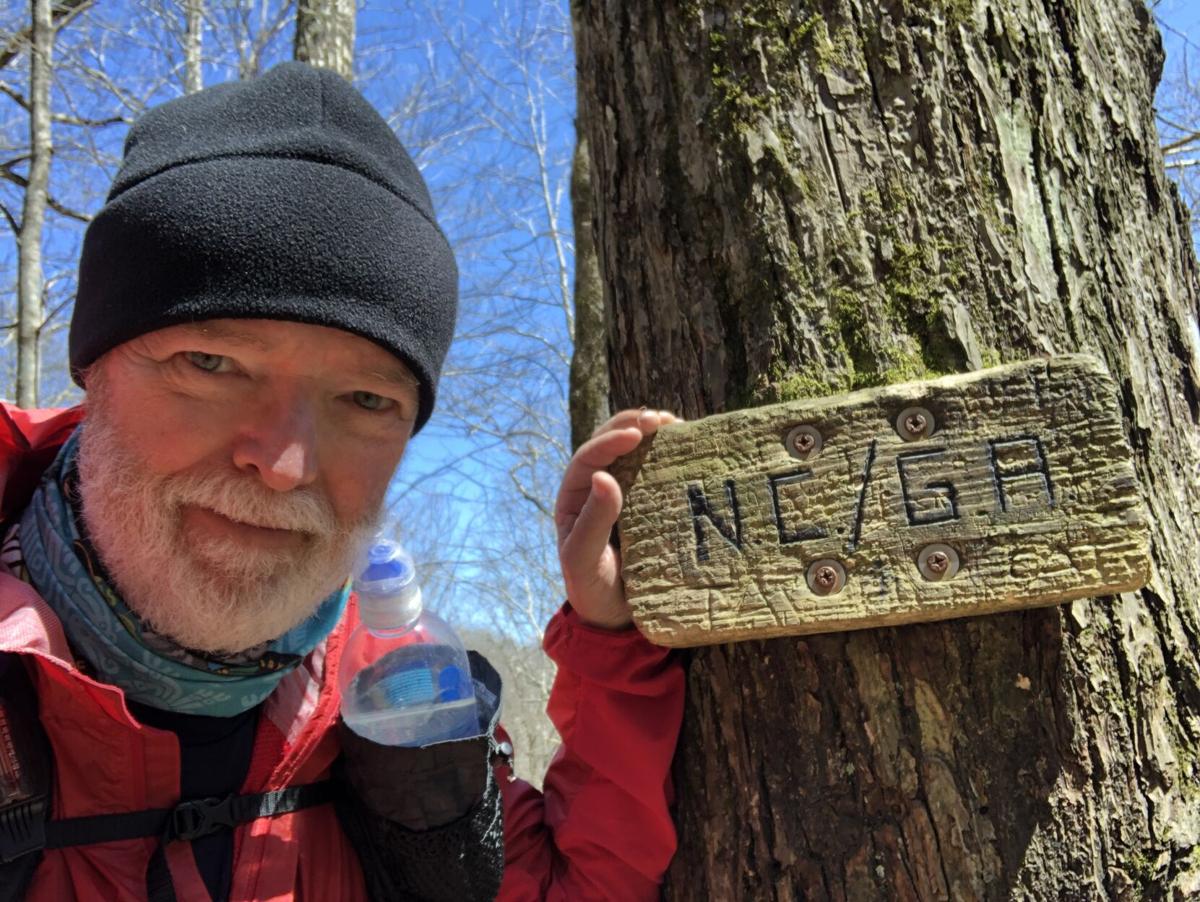 Tampa native Kevin Newsome poses for a picture during the early stages of his Appalachian Trail hike that began at Springer Mountain, Georgia, and ended at Mount Katahdin, Maine. 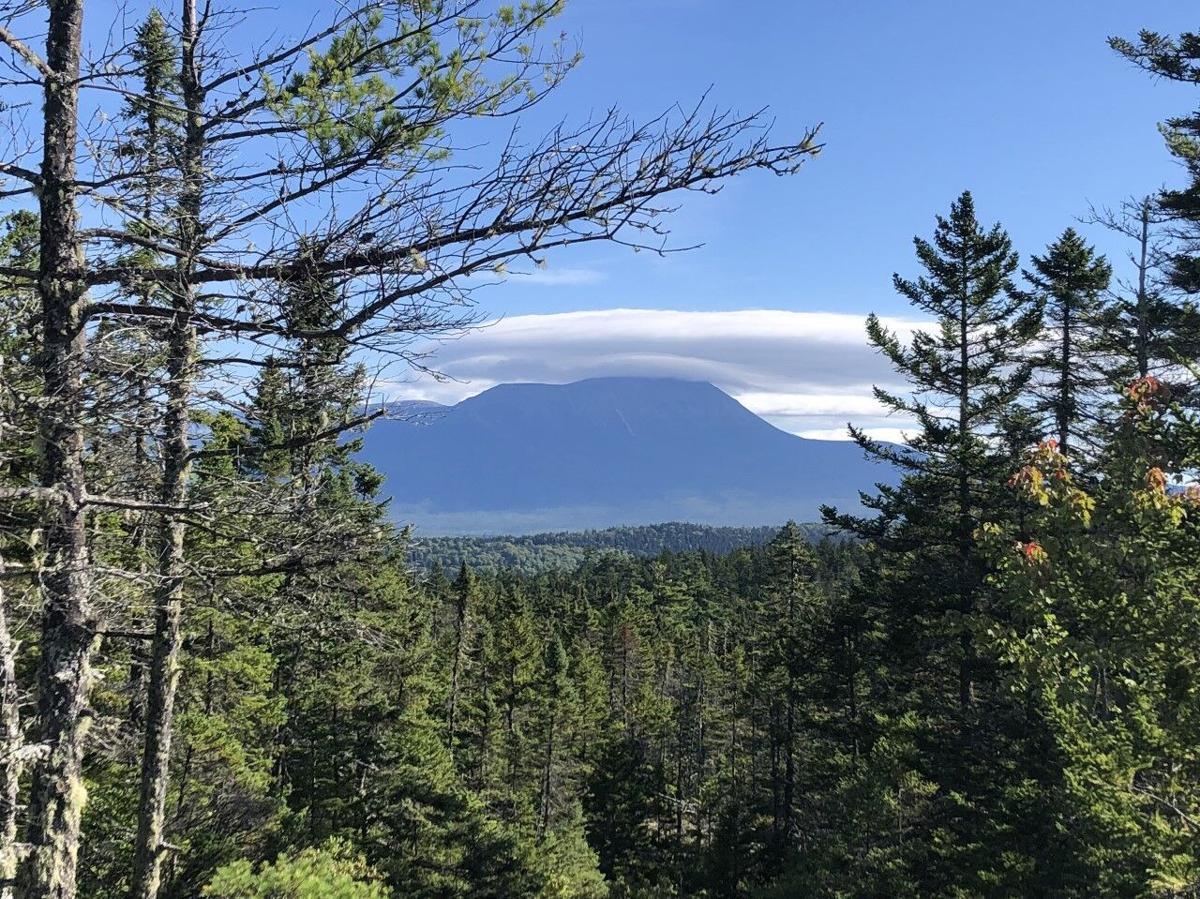 This photo shows Mt. Katahdin, Maine, as seen from Abol Bridge, about 10 miles away. Mount Katahdin is the northern terminus of the Appalachian Trail, a destination reached by Tampa native Kevin Newsome.

Tampa native Kevin Newsome poses for a picture during the early stages of his Appalachian Trail hike that began at Springer Mountain, Georgia, and ended at Mount Katahdin, Maine.

This photo shows Mt. Katahdin, Maine, as seen from Abol Bridge, about 10 miles away. Mount Katahdin is the northern terminus of the Appalachian Trail, a destination reached by Tampa native Kevin Newsome.

TAMPA — Kevin Newsome left for the Appalachian Trail in March and Reckless Abandon returned in September.

The 66-year-old Tampa native successfully trekked the nearly 2,200-mile, world-renowned trail over a six-month period, cutting through 14 states from Georgia to Maine.

Prior to the March 23-to-Sept. 10 journey, Newsome was best known locally as the owner of Newsome’s Studio of Photography, a well-regarded business operating out of the Carrollwood area for the past 35 years.

While nothing’s changed in that regard, Newsome now has an alter-ego that’s known on a much broader scale as a long-haired, bushy-bearded mountain man and conqueror of the world’s longest hiking-only footpath.

Picking up a trail name, kind of like a trucker’s CB handle, is part of the A.T. hike experience, and it’s often given by fellow hikers.

For Newsome, a passive encounter did not inspire a trail name like Reckless Abandon, either.

“I was going down a muddy hill backward, moonwalking trying to get down this hill,” Newsome, 66, said while sitting outside a Wesley Chapel Starbucks one afternoon, fewer than two weeks after summitting Maine’s Mount Katahdin, the northern terminus of the Appalachian Trail. “By the time I get to the bottom I'm moving really fast, and I came flying, crashing into a picnic table. All these other hikers from the shelter are screaming and yelling and laughing hysterically, then somebody yelled, ‘Hey! Reckless abandon!’ Somebody else yelled, ‘That should be his trail name!’

“Next thing you know, I was Reckless Abandon,” Newsome said, recounting the birth of his alter-ego. “It took me about a week to accept it, though. It wasn’t until I was in North Carolina before I was introducing myself as Reckless Abandon.”

It wasn’t long before others, including perfect strangers, were addressing Newsome as Reckless Abandon, too.

Newsome documented his A.T. adventure on various social media platforms, including YouTube, where he posted videos as ‘Kevin Newsome, AKA Reckless Abandon.’ That page now has nearly 1,500 subscribers.

“The hiker community is an entity amongst itself,” Newsome said. “I was recognized a lot on the trail by other hikers and that surprised me. That totally shocked me; I didn’t see that coming.”

And it wasn’t just other hikers.

“One time I was hitchhiking in Massachusetts to get back to the trailhead after spending the night in a motel getting my laundry done, showering, resupplying,” Newsome said. “It’s about a 5-mile walk and I’m hitchhiking, which I hadn’t done since I was 17. A pickup truck pulls over and this girl jumps out: ‘You’re Reckless Abandon, aren’t you? It’s the beard! Everybody knows your beard!’ So the beard became an icon amongst itself. I'm almost afraid to get rid of it, then nobody will recognize me.”

Being bestowed a trail name like Reckless Abandon was a happy accident for Newsome. His man-of-the-wilderness white beard fell right in line, growing into the recognizable, unruly feature of a man with such a moniker, and Newsome, though precise, well-prepared and safe, was not one to shy away from whatever the A.T. presented at any given turn, ascent or descent. But looking back, pre-adventure, Newsome was already acknowledging the brashness of it all. Maybe the alter-ego was already in there, waiting to introduce himself to the A.T. community.

“Newsome’s Studio will be closed from March 1 until mid-September as I attempt to do the stupidest and most irresponsible thing I’ve ever done … hike the 2,200-mile long Appalachian Trail.”

That was part of the message Newsome posted to his www.NewsomeStudio.com website, announcing his hiatus.

“I was joking when I said it, but I did see it as a fiscally irresponsible thing for me to do, to shut my business down for six months,” Newsome said.

Leaving on a whim would certainly fall under the category of irresponsible, but Newsome and his wife/business partner, Kaye, made sure to get financial affairs in order prior to setting out. That included selling their Carrollwood home and relocating to New Tampa, settling all debts and paying off bills a year in advance. This was all accomplished pre-COVID, as well, since tackling the trail was supposed to be a 2020 endeavor.

The allure of the Appalachian Trial took hold about two years ago when Newsome listened to Jeff Alt, author of “A Walk for Sunshine,” speak about his 1998 hike experience at the Carrollwood Barnes & Noble.

“I bought the book and I read it and I was fascinated,” Newsome said. “Then I bought another and another and next thing you know I’d read 20 books and gone down that YouTube rabbit hole where everyone follows the hikers online. Shortly after that I had an Excel spreadsheet of all the gear I would bring and then I'm telling my wife about it. She got on board with it, and we figured out how to financially do it, because it is a financial commitment. It’s six months away from work.”

In total, Newsome estimates that his A.T. adventure costs cleared $10,000. It started with purchasing about $3,500 worth of gear, and monthly expenses — food, shelters, shuttle rides, more gear, etc. — averaged $1,200.

And while sitting down re-living a journey most aren’t well-suited for, Newsome said it was worth every cent.

“I needed something that would be epic and adventurous, and I've always loved the idea of the outdoors and camping.”

Everyone taking on the trail will be outdoors, always. And camping, often. Check and check. But what about that other, critical aspect of transporting oneself from Springer Mountain, Georgia, to Mount Katahdin, Maine.

“Someone asked me once on the trail, what’s the thing you like the least about hiking?” Newsome said. “And I said hiking. It’s not that I hate hiking, it’s just that my least favorite part of hiking is the hiking part.”

Meet Reckless Abandon. The hiker that doesn’t so much care for hiking but hikes 2,193.1 miles on the world’s longest hiking-only trail. Willingly and enthusiastically.

Back home, Newsome’s jumping right back into his photography business. Most everything on that level is the same, except he’s keeping the A.T. look. On an upcoming meeting with a beard stylist, Newsome said he’s not averse to a “Hunger Games” look. “It might be something off the wall that nobody would expect. I might come out looking like President Snow or something,” he said, referring to a character from the novels.

Newsome’s local visibility will be enhanced, as well, by becoming a Carrollwood Park Conservancy board member, a group that oversees the operations and maintenance of Carrollwood Village Park.

“Kevin is an institution as a professional photographer in the Carrollwood area,” said Dawn Hudson, past president of the Carrollwood Park Conservancy. “Right now, Kevin personifies the great outdoors. He understands what Mother Nature is all about and he can bring an awful lot of positive energy to people who are involved with the park.”