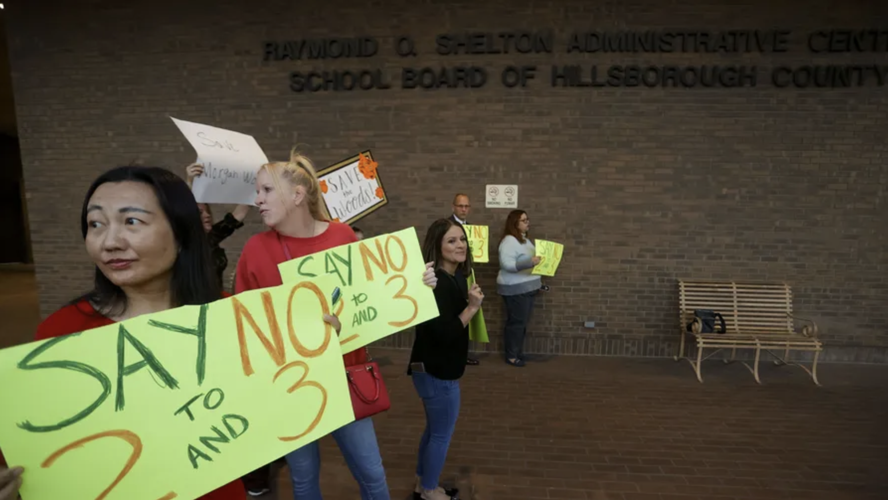 Residents protest proposed changes in school attendance boundaries during a Hillsborough County School Board meeting Jan. 10 at district headquarters in Tampa. Their signs refer to the three plans that are under consideration. 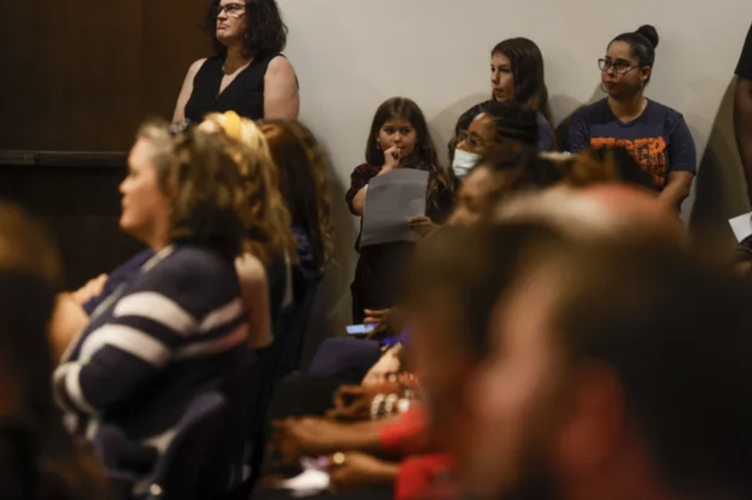 Morgan Woods Elementary student Amelia Chappel, 8, holds her notes before speaking during the School Board meeting Jan. 10. Morgan Woods is among the schools being considered for "repurposing" as the district weighs a major realignment.

Residents protest proposed changes in school attendance boundaries during a Hillsborough County School Board meeting Jan. 10 at district headquarters in Tampa. Their signs refer to the three plans that are under consideration.

Morgan Woods Elementary student Amelia Chappel, 8, holds her notes before speaking during the School Board meeting Jan. 10. Morgan Woods is among the schools being considered for "repurposing" as the district weighs a major realignment.

As Hillsborough County officials roll out a sweeping plan to redraw school attendance boundaries, School Board members last week were echoing public criticism of the project, an issue they will vote on in February.

While only one board member — Karen Perez — has said she will vote against the plan, four of the seven voiced concerns about the way the public has been told that thousands of students might be transferred and a small number of schools closed and “repurposed.”

Board member Jessica Vaughn, toward the close of a contentious board meeting Jan. 10, said she is “very distrustful” because the district and its consultant are not making diversity a priority in deciding how to redraw the lines. She also said the public and board members are not getting enough information about financial implications, even though the purpose of the project is to save money.

“I feel frustrated as a board member that’s going to help make decisions for my community, so I can imagine how frustrated the community feels,” Vaughn said.

Perez said school changes will be especially difficult on immigrant children who already weathered upheaval in their journeys from countries such as Cuba and Venezuela. Morgan Woods Elementary, which might be repurposed, is 80% Hispanic.

Parents who don’t speak English feel disenfranchised in the meeting process, Perez said. “They cannot have their voice heard; they get lost in the shuffle.”

Stacy Hahn of South Tampa reflected on the pressure she faces as families in that area mobilize to keep their children in A-graded Plant High School and Coleman Middle School.

On the eve of a presentation at Plant, she said, “these opportunities to meet and talk with the community, I wish there were more of them. I wish there were two or three rounds of this built into the process, because I’m sure even after this first round of these face-to-face meetings, there’s going to be many, many more questions that continue to come up.”

Board member Henry “Shake” Washington alluded to feedback he received at a public forum on the plan at East Tampa’s Middleton High.

“We got a long ways to go,” he said. “And a hard road, because quite a few people don’t understand. If we don’t have good communication, then it’s not going to be successful.”

Like the effort in 2022 to approve a special school property tax, which lost at the polls by 591 votes, the boundary changes are intended to pay teachers a competitive salary by cutting other costs. Locked in a bargaining impasse, the district is now paying teachers at last year’s rates and many have left. At last count, the district was advertising 524 instructional vacancies.

But unlike the tax referendum, the boundary changes can be enacted with a School Board vote.

“We know this is going to create angst,” Superintendent Addison Davis said. But, he said, “it’s very difficult to provide ongoing experiences to schools that are underenrolled.”

Davis continued to encourage parents to speak out about their concerns. “We are welcoming all the feedback we get,” he said. “Because we want to make certain we get as much information as we can so I can make a sound recommendation to the board.”

In addition to the meetings that wrapped up Jan. 13 at Bloomingdale and Wharton high schools, Davis has been meeting with community and business organizations.

A School Board workshop is planned on Jan. 31. Workshops are open to the public, although public comment is not permitted.

Meetings to discuss the plan will take place during the second week of February, with a final vote planned for Feb. 21. The board can select one out of the three proposed plans, elements from more than one plan, or it can decide not to take any action on the issue.