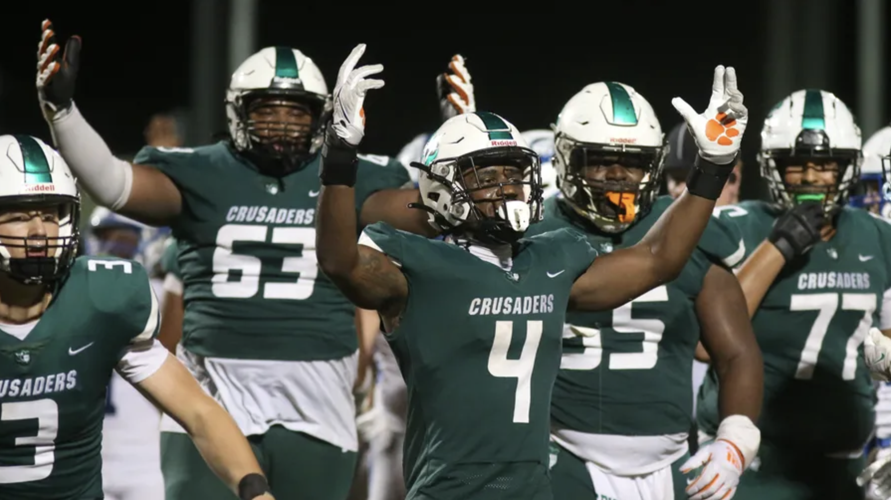 Tampa Catholic senior Lewis Carter (4) celebrates after playing on both sides of the ball and making huge plays, none bigger than a blocked punt that led to a touchdown against rival Jesuit. 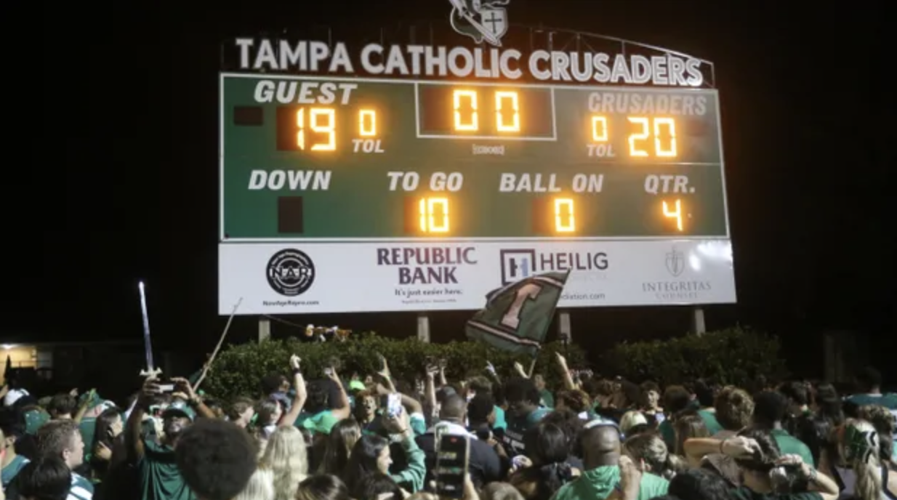 There is plenty to celebrate for Tampa Catholic after 22 straight losses to Jesuit.

TAMPA — In the past 22 years, Tampa Catholic had won district titles, sent players to storied college football programs and even made a state championship game appearance. But during that time, the one thing the Crusaders couldn’t do was beat a team 3 miles down the road.

In each of the last 22 meetings between rivals Tampa Catholic and Jesuit, the Tigers found a way to win. Jesuit, some would say, had gotten in the Crusaders’ heads.

“They weren’t in my head,” said Carter, an Oklahoma commit. “Through the week, we just all understood that it wasn’t all in our head. We just had to come out here and dominate, and we’d get the victory.”

There wasn’t exactly dominance on either side Friday, as both defenses kept the other team at bay all night. But with less than four minutes to play, Tampa Catholic trailing by just six, Carter leapt in front of a Jesuit punt and blocked it, with Tre Pompilus III running in for the touchdown. Jesuit’s decades-long streak ended with a 20-19 Tampa Catholic victory.

Lewis’ game-changing play, coach Jeris McIntyre said, was all part of the plan. In fact, the Crusaders had been over it, time and time again.

“(The plan) was for Lewis to find the crease and go. We practiced it all week. It was set up. If we had them backed up, we were going to rush the punt,” McIntyre said. “We did, and it worked. And I’m glad.”

Friday’s game might have ended well for Tampa Catholic (8-1), but it didn’t start off that way.

On the first play of the game, Jesuit quarterback Will Griffin connected with wide receiver Bryson Goodwin for an 80-yard touchdown to put the Tigers (6-4) ahead early. The Crusaders answered with six points of their own later in the quarter when a costly Jesuit penalty gave Tampa Catholic a first down deep in Tiger territory, and Carter soon ran in a 5-yard touchdown.

While also excelling on defense, Carter had most of the Crusader carries, many of which came on direct snaps.

“Lewis is our senior leader, and he put us on his back and he led us to victory,” said McIntyre, a Tampa Catholic alumnus. “He’s going to go down as one of the best players, if not the best all-around player, that TC has ever seen.”

Tampa Catholic’s defense stifled a Jesuit run game that has carried the Tigers all year, and twice in the next two quarters Jesuit was forced to settle for field goals. The tide seemed to turn in the fourth quarter, when linebacker Troy Bowles picked off Tampa Catholic quarterback Trey Hedden, returning it 40 yards for a Jesuit touchdown.

The Crusaders, though, hit right back.

A Jesuit penalty gave Tampa Catholic a short field on the ensuing drive, and it didn’t take long for Hedden to find TJ Moore in the end zone for a 10-yard touchdown.

Jesuit had a single first down on its next possession, and a pair of incomplete passes and two penalties forced the Tigers to set up for what would become a consequential punt from Jesuit territory.

The rest, as they say, is history. And after 22 years, the Crusaders have finally made some of their own.

“I’m just so proud of the Tampa Catholic community,” McIntyre said. “I’m proud of everybody who bought in, stayed here at Tampa Catholic, trusted the process and did everything they needed to do to have a day like this happen.”