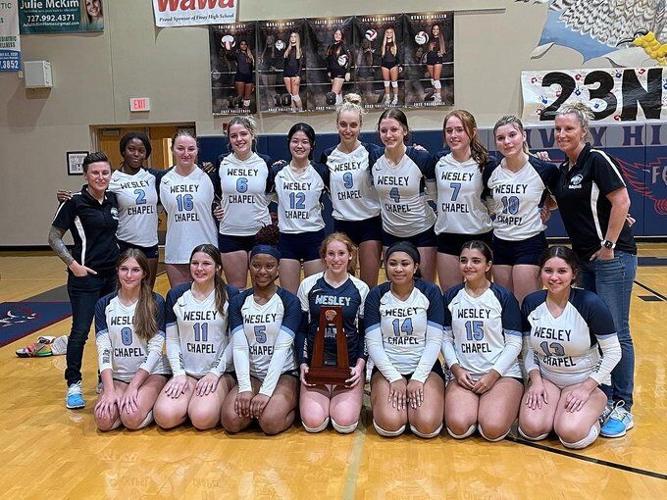 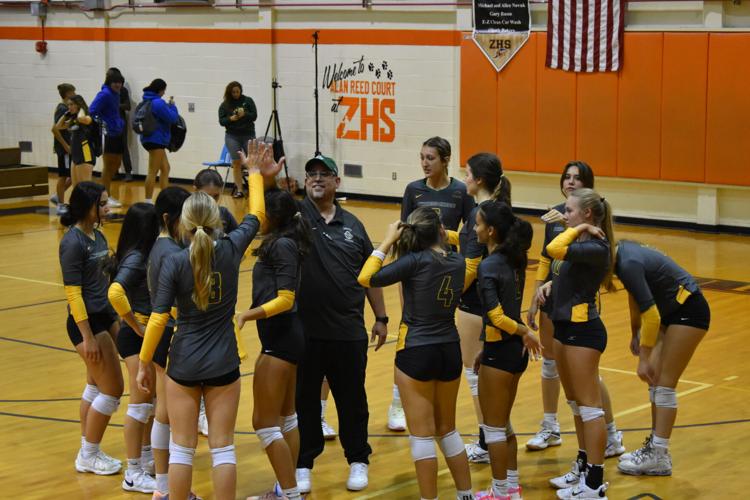 During a timeout on the court, coach Angel Ramirez high-fives co-captain Camryn Paradise in the Cypress Creek huddle.

During a timeout on the court, coach Angel Ramirez high-fives co-captain Camryn Paradise in the Cypress Creek huddle.

Wesley Chapel and Cypress Creek posted record-setting seasons in high school volleyball with the Wildcats going where they had never gone before.

Two-time district champion Wesley Chapel, coming off its best season ever, made history once again. The Wildcats, who last year won 19 games and reached the region finals for the first time ever, went one step further this year by making their state final four debut.

A 3-0 state semifinal loss to Naples Barron Collier dashed Wesley Chapel’s hopes of a championship. After defeating Cypress Creek in a district final, the team reeled off regional victories over Fivay, Tavares and Merritt Island to reach the state semifinal. The Wildcats finished with a school-record 23 wins.

“It’s incredible. We made history,” coach Brittany Collison said. “These girls have poured their hearts and souls into the program.”

Leading the Wildcats was Chloe Danielson, the defending Sunshine Athletic Conference Player of the Year who just might repeat as that postseason award winner. The senior middle hitter notched her 1,000th career kill shot during the district tournament.

Collison, however, noted that this year’s team has not been solely reliant on Danielson. There was plenty of balance with key contributions coming from Jenna Ly, the team’s leader in aces and assists, and Brooke Ashkenase, who tallied more than 300 digs.

“We’ve got a lot of people helping out this year,” Collison said. “In the past we had to rely on Chloe for everything. It’s nice that she doesn’t have to have that much pressure on her.”

Cypress Creek, a sixth-year team, matched a school record by winning 17 games this season and returning to the playoffs. This year’s mark came under first-year coach Angel Ramirez, a former assistant who replaced Jennelle Day, who is now a school administrator at Zephyrhills.

After losing to Wesley Chapel in a district final, the Coyotes defeated Lake Wales in a region quarterfinal before bowing out of the playoffs after a region semifinal loss to Merritt Island.

Cypress Creek lost half of last year’s roster to graduation but got solid play from returners Sadie Walker and Laney Brinson.